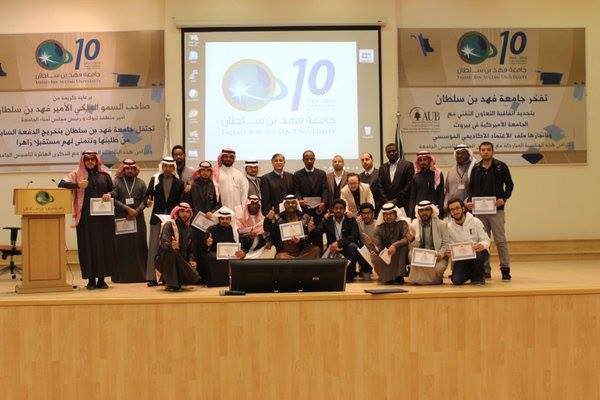 The Computing College at FBSU, in collaboration with the FBSU ACM Student Chapter and the Programming Club, celebrated the Computing Week during Dec. 9 – 15, 2015 to raise awareness inthe FBSU community and among secondary school students about computing in general and Computer Science in particular. This worldwide event is supported by several renowned enterprises of the computing industry such as Microsoft, Facebook, Twitter, and Yahoo.

The event included several interactive educational activities which were appreciated by both students and faculty. The activities included a two-day exhibition showcasing several corners related to Computer Science and Computer Engineering disciplines, as well as final year projects of graduating students.

The Computing Week also involved a two-hour “Hour of Code” activity for FBSU community and secondary school students in Tabuk that took place on a daily basis in the University Internet labs. The “Hour of Code” is a world-wide occasion initiated by the nonprofit organization Code.org in partnership with over 100 renowned companies including Microsoft, Facebook, Twitter, etc. for the purpose of introducing students to programming, demystifying code, and showing that computer science is not a rocket-science, but one that anybody can learn its basics," said Hadi Partovi, founder and CEO of   Code.org., who further stated: “over 100 million students worldwide have tried an Hour of Code. The demand for relevant 21st century computer science education crosses all borders."  Moreover, Hour of Code's homepage announces that "The goal of the Hour of Code is not to teach anybody to become an expert computer scientist in one hour, … but one hour is only enough to learn that computer science is fun and creative, that it is accessible for all ages, for all students, regardless of background."

Noteworthy that the Hour of Code is designed as games that are accessible on computers, laptops, tablets, and smartphones, and offered in 40 different languages. Last year over 150 million students worldwide participated in this event, and this year FBSU was among almost 200,000 organizations around the world to participate in the Hour of Code.

The weeklong event was concluded by a closing ceremony on Tuesday December 15 in the presence of the FBSU administration, faculty members, and students.